This past Saturday I had the opportunity to volunteer with the event Pheon at the Smithsonian American Art Museum.  I have to admit I wasn’t sure what to except.  When I signed up for the event the only thing I knew about it was that it was an “Alternative Reality Game” and that I was assigned to sit at the “Stave table”.

When I got to the museum I went up to the Luce Center and found the Stave table.  Here another volunteer explained the event to me.  It turns out that Pheon is a high tech scavenger hunt.  Designed by John Maccabee of the San Francisco-based ARG development company CityMystery, visitors complete a series of missions based on the collections from the museum.  To add to the fun CityMystery came up with a back story for the game.   According to this set-up two warring factions, the Staves and the Knaves, are trying to restore balance by capturing the Pheon after intruders from the “real world” (the Seers) have upset their virtual world called Terra Tectus.

When participants first arrived they answered a few questions such as “would you rather pig out on pretzels or cupcakes” or “would you rather play offensive or defensive in a football game.”  Based on their answers the visitor was assigned to either the “Stave” or “Knave” team.  They then completed a series of scavenger hunt-like tasks throughout the museum.  They had to search for clues in paintings, make aluminum foil sculptures, go “under disguise” by wearing a fake moustache, and get clues via text messaging.  The Stave and Knave teams were in friendly competition to see who could get the most participants to finish.  At the Stave table my job was to stamp the visitors’ form after they finished each task, pass out the fake moustaches, and give out prizes when they completed the whole challenge.    I really enjoyed helping the visitors, and seeing how excited they got when they finished everything.  I’m happy to say that when I left the museum at 3:00 the Staves were winning.  According to the website the Staves ended up winning by one team.

Participating in this event demonstrated to me that museum programming has tons of potential for being fun and interactive.  As the visitors came back to my table they told me that the activities were getting them to look at the art work in new ways.  Many of the participants were college age, a group that is often under served by event programming, as usually these events either focus on children or adults.  Any event that gets new visitors into a museum is certainly a success, especially when they have fun being there.

Do you think this type of programming is a good idea for museums?  Some may complain that it is “edutainment”- a mixture of education and entertainment.  Is this worthwhile for museums to pursue or does it somehow lower the “value” of the artwork?

See below for some pictures from the event. 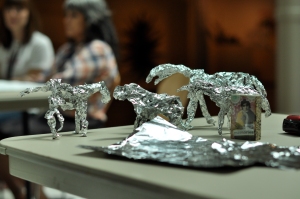 One of the Challanges- Aluminum Horses 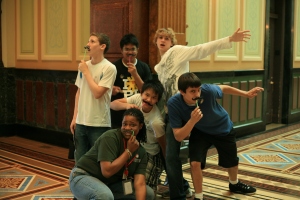