In April, I applied for and received the Carol Bird Ravenal award for research travel purposes. Carol Ravenal is Professor Emerita in Studio Art and Art History, and her award for student research travel alternates yearly between the programs. This year, the award was split between myself and Patti Bray—Patti used it for travel to California, while I used it for international travel to visit exhibitions and museums focused on the art of Henri de Toulouse-Lautrec in Cardiff, Wales; London, England; and Albi, France.

The research was in support of my master’s thesis in my area of specialization—Modern European art. The goal of my thesis was a reconsideration of Toulouse-Lautrec’s famous painting At the Moulin Rouge, painted in 1892/95 and housed at the Art Institute of Chicago. The crux of the reconsideration was based on the figure of Moulin Rouge dancer May Milton in the far right foreground of the image. 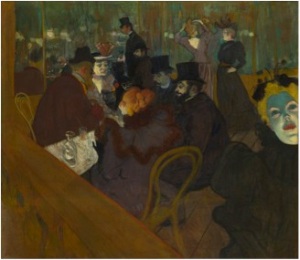 Here’s an excerpt from my thesis introduction that talks about Milton:

“The remarkable green cast of her face is due to artificial stage light that is not present in the picture’s composition. Because of this unnatural coloring to her face, Milton’s face here has been noted as garish, confrontational, and shocking—consequently, Milton exists as the radical artifice at play here compared to the normative, more naturalistically colored figural groupings in the middle ground and background. When considering At the Moulin Rouge, a more comprehensive approach to understanding contextual information is necessary, because it will better allow us to see that Milton is not artifice incarnate, but […] serves as the lynchpin between two poles here—reality and artifice. She can then be used as a departure point for investigation into these issues.”

Within a study of this painting, I address numerous issues, but I ultimately offer a nuanced re-consideration of this painting, by establishing the basic historical context of Montmartre and Toulouse-Lautrec’s life in its dance halls, looking at how social tensions and issues of the body and sexuality manifested in the performance culture of fin-de-siecle France, addressing the previous literature on At the Moulin Rouge, offer up an extensive analysis through feminist consideration of Toulouse-Lautrec’s painted works, and consider the degree of division between public and private in his work.

For the first part of my proposal, I outlined why it would be beneficial to visit two exhibitions on Toulouse-Lautrec. The first of these took place at the National Museum Cardiff in Cardiff, Wales, UK, a show of prints on loan from the British Museum being exhibited together under the headline “High Kicks and Low Life: Toulouse-Lautrec Prints.” These prints were divided into ‘Public Passions’ and ‘Private Passions,’ and the public/private divide was a portion of my reconsideration of At the Moulin Rouge and the artist’s other work. I was also interested in their presentation of Toulouse-Lautrec’s more erotic images as sensitive rather than the previous scholarly trend of viewing it as misogyny. 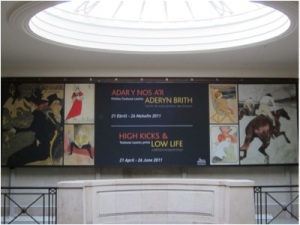 My stay in Cardiff was short but sweet—in addition to touring the art museum and the city’s main sights, I checked out Cardiff Castle.

From Cardiff, I took a train to London for the next exhibition—I was especially lucky to have two such geographically close exhibitions overlap each other by a mere ten days, so I was able to see both. The London show was held at the Courtauld Institute Gallery and was a bit bigger, titled “Toulouse-Lautrec and Jane Avril: Beyond the Moulin Rouge,” and was the first show to look specifically at the platonic relationship between Toulouse-Lautrec and Moulin Rouge dancer Jane Avril, seen in many of his dance hall images, as well as in At the Moulin Rouge (identifiable by her signature red hair).

I was extremely lucky at the Courtauld, since At the Moulin Rouge had actually (rather secretly) traveled from Chicago to London for the show! Here I am reveling in my two birds, one stone moment. 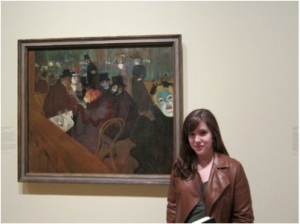 The Courtauld show was very strong, with a lot of great pieces that I was able to really study up-close and take notes on. The catalogue was very comprehensive and really contributed to my research and boosted some arguments I made in my paper. Of course, I checked out the rest of the world-famous Courtauld collection and really enjoyed seeing so many of my favorite modern art pieces. I squeezed in a visit to the Tate Modern and the British Museum as well!

For the second part of my Ravenal award proposal, I pushed for being able to take advantage of affordable air travel in Europe and travel down to Albi, France to see the Musée Toulouse-Lautrec in the artist’s hometown. This allowed me to see the largest body of the artist’s works, many of which are not widely reproduced. It was wonderful being able to see so many of Toulouse-Lautrec’s paintings and posters up close, although I did end up wishing they were able to have more paintings on view at one time—it’s not a collection to be missed, though! Unfortunately, no photographs were allowed inside, but the gardens of the Berbie palace (where the collection is held) were absolutely gorgeous. 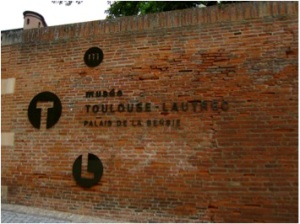 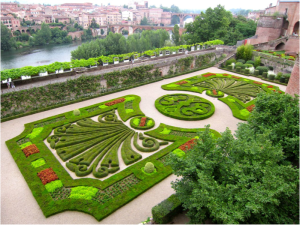 Albi is situated in the Midi-Pyrenees region of France, about an hour bus ride through the French countryside from the sizable city of Toulouse (where I flew in). Albi, however, is a very small and extremely old town—their main bridge was built around the year 1000! I knew Albi would be small, but I had figured since they have the Toulouse-Lautrec museum as well as the absolutely enormous Saint-Cecile cathedral, it would still be quite accessible to tourists. Well, good thing I took six months of French last year, because only about three people I interacted with spoke any English! In a moment of bravery after receiving the award, I made a phone call via Skype to Albi when booking my hotel, since I wanted some help from the tourism office on reserving a place to stay. When I got there, the tourism office supplied me with free wine, posters, maps, and free admission to all the tourist activities including the museum… it worked out great! 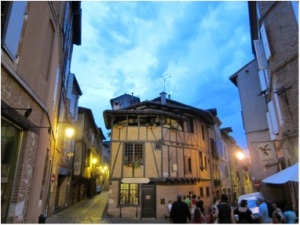 My trip went perfectly, and was made possible by Professor Ravenal’s amazing grant, so when it next comes up for the Art History program, AU grad students should definitely apply! I was able to come home with a lot of invaluable first-hand looks at Toulouse-Lautrec’s work and really enrich my thesis paper.

I posted almost all of my travel photos to my Flickr account if you want to see more pictures and some video! At the end of my trip, I was able to spend a little of my own money and fly cheaply over to Stockholm to see some dear friends, so I have some photos from there too. Found here: