While the artists of the Skagen Art Colony may appear to be at a remove from late-nineteenth century avant-garde art practice, the National Museum of Women in the Arts’ exhibition, A World Apart: Anna Ancher and the Skagen Art Colony (February 15th-May 12th, 2013), demonstrates their prolific exchange with modern life and aesthetics. This show engages viewers in a revisionist dialogue with the Franco-centric model of Impressionism by placing a Danish woman as the subject of its reappraisal. Anna Ancher (1859-1935), well known in her native Denmark, has remained relatively unknown here in the United States. NMWA has mounted the first large-scale show of her painterly canvases and it should not be missed.

Ancher possessed an agile technical ability that enabled her to enter into stylistic dialogue with her Parisian contemporaries while still tugging at the fringes of lingering traditional representational models. Ancher’s male counterparts painted monumental outdoor scenes, such as her husband Michael Ancher’s heroicizing vision of strapping fishermen in Fishermen Launching a Rowboat (1881), but Anna Ancher found her fullest expression in the more quiescent, yet profoundly dynamic, subtleties of the domestic interior. 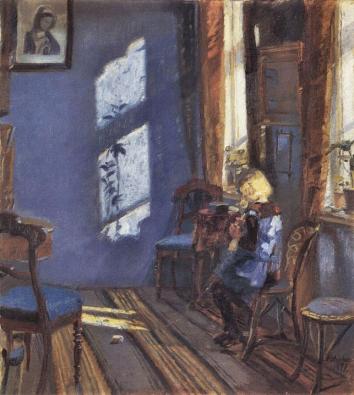 Sunshine in the blue room (1891) depicts an elegantly decorated room of the artist’s home in which her daughter is seated. The young girl’s form nearly dissolves amongst the interplay of light and color on the room’s surfaces, inspired by the afternoon sun. 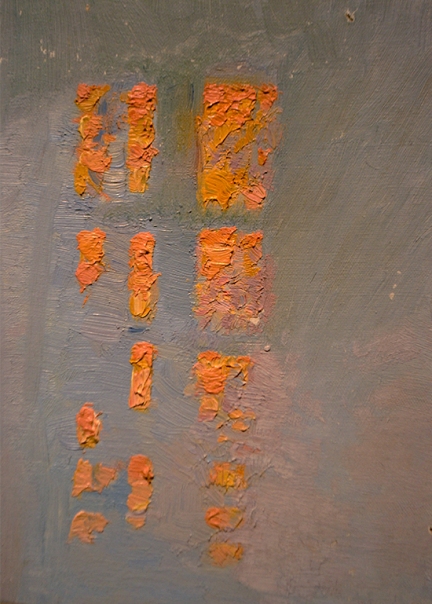 Ancher’s less synthetic works—those studies in color and light—truly display her aesthetic prowess. Arguably, her boldest work is Light on the wall in the blue room (ca. 1890): it is small in size, but packs a formalist punch. Ancher’s spare employment of geometricizing blocks of warm color economically captures the visual and atmospheric sensation of light cast on a wall as it is refracted through a window. Fiery-hued paint is applied through thick, impastoed brushwork. The comparatively unsaturated negative space delineates the transecting wood of the window’s frame. Beneath a layer of gray, however, a field of deep blue pushes forward and propels its orange compliment insistently at the viewer. Ancher’s light is animated through the physicality of her oil paint.

The artist made her home the site of her avant-garde practice. In “Modernity and the Spaces of Femininity” a chapter in Vision and Difference: Femininity, Feminism and the Histories of Art, Griselda Pollock determined that women Impressionist artists employed their domestic surroundings as visual fodder for their creative endeavors. Adhering to bourgeois decorum, the women Impressionists did not depict scenes from the gritty street and café cultures of modern Paris; rather, they largely painted their own everyday domestic experience—a practice clearly evident throughout Ancher’s oeuvre.

Much like her female contemporaries, Ancher was of a class that allowed her access to models from the community, but the individuals she portrays come (most often) from her domestic setting. Ancher’s mother, Ane Brøndum, for instance, appears in multiple canvases in the exhibition. Portrait of mother (Mrs. Ane Brøndum) (1913) reads like a dual meditation on model and material. The seated Mrs. Brøndum’s modest clothing glows, yet again, in the light that enters from a nearby window, but the subject is not eclipsed by the artist’s formal concerns. Ancher has rendered her mother’s aging features with great care: her heavily lidded eyes are cast downward accentuating the pull of gravity on her lined, fleshy cheeks and her humbly clasped hands are articulated by swollen joints emphasized through detailed application of highlight and shadow. She appears to the viewer as both a serene and monumental matriarch. Ancher’s nuanced treatment of the tonal variations in the white shawl, bonnet, and blanket that drapes over the back of the woven wicker chair is reminiscent of Cecilia Beaux’s work New England Woman (Mrs. Jedediah H. Richards) (1895). Portrait of mother (Mrs. Ane Brøndum) is not only a likeness, but also equally a figure through which Ancher could assert avant-garde treatment of the everyday subjects of her domestic life.

Few women artists have ascended through the ranks of the canonical monolith that is Impressionism. Fewer still are those who have done so outside of the movement’s Parisian epicenter. Today, women Impressionists such as Berthe Morisot and Mary Cassatt—championed by feminist art historians such as Griselda Pollock—are as recognizable as their male contemporaries, but criticism and scholarship largely remains trained on Impressionism’s French manifestations. NMWA’s A World Apart positions the peripheral coastal city of Skagen (as well as the domestic setting) as an artistic center worthy of investigation and Anna Ancher as a cutting-edge artist in her own right.