Last week, in Dr. Bellow’s “Museum and Society” course, we examined the way cultural difference manifests in museum practice.  Our weekly assignment asked us to visit either the Smithsonian National Museum of African Art or the Freer/Sackler Galleries, and to note the way the museum’s informational texts described the artworks on display.  We then were asked to choose an artwork in the collections of the National Gallery of Art, and to write a text about that work using the language employed by curators at museums devoted to non-European art.

I chose to visit the NMAA and the NGA; in looking at the object labels at both institutions, it became immediately clear to me how the two museums’ approaches varied. Whereas the text for European and American artworks in the National Gallery of Art often included biographical information about the artists, and speculated as to the specific influences that may have shaped their expression, the NMAA described its objects in more general terms. The museum presented African works as examples of object types and included information about their general functions and significance across broad geographic regions and periods. I was surprised in how much this approach deprived the artists of these objects any degree of agency, and perpetuated a view of their culture as different and “Other.”

With that in mind, I chose to write an object label for Max Weber’s painting Rush Hour, New York (1915) as if it were one of the works on display at the National Museum of African Art. My intention was to reveal how the language that museums use to present artworks are one of the numerous ways that they shape our perception of other cultures, and effectively insert distance between non-African visitors to the museum and the objects on display. 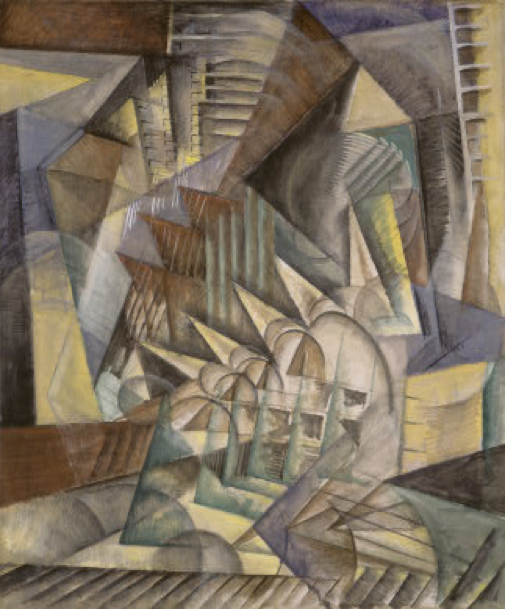 For my project, I reordered the information in the wall label and provided the added gloss:

During the early twentieth century, some men and women were motivated to express their feelings toward changes in their physical and social environment through visual creations. This piece was created by a male artist who emigrated from a region known today as Poland to New York City in the United States at the turn of the twentieth century. The visual imagery included in this work likely reflects the artist’s reaction to the sights, sounds and feelings toward the high amount of activity to his urban setting. In this work, the artist has applied pigment suspended in linseed oil to a tightly woven cloth composed of hemp stretched across a square wood frame. The abstracted shapes and fragmented forms that the artist has used to evoke buildings, people and forms of transportation from his native environment are signs that he may have belonged to a group artists who were experimenting with new forms of two and three-dimensional visual expression during this period.

Paintings like this work were frequently traded between artists and elite members of society as a form of currency in the early twentieth century. Obviously deemed inferior in quality in comparison to other two-dimensional works by the artist and lacking in monetary value, it remained as one of the artist’s personal possessions until 1970. Nine years after the artist’s death, the children of the late American executive and philanthropist Andrew W. Mellon discovered this work in a retail establishment specializing in the sale of decorative wall objects. Recognizing the status of its maker and its symbolic value within European American visual culture, they purchased and bequeathed it to the National Gallery of Art for later generations to study.